Archaeological Museum Vikramshila in Bhagalpur is available for tourists at Antichak. In 2004, the excavated artifacts of this museum had been declared public. Visitors can take a walk through the museum to get glimpses of historical past of the region. The museum is quite spacious and is divided into various segments. The ground floor as well as the first floor of the museum building has collections of antiquities belonging to Pala dynasty. The first floor also contains an excavated and a scaled site model of Vikramshila itself. Futher there are numerous other attractions in the museum that are worth visiting. 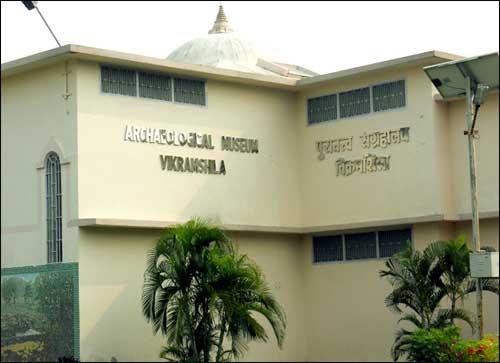 An Abridged History of Vikramshila

In ancient India, the two most significant/ popular Buddhist learning centers were Vikramshila University and Nalanda University. King Dharmapala in the 8th century AD, (783 to 820) established Vikramasila University to sustain the excellence of scholarship of Nalanda monastery and to spread Tantric Buddhism. In 11th century AD, Vikramshila monastery, as an intellectual center had 1000 students and 160 teachers under the reign of King Ramapala. A notable and popular abbot known as Atisha was listed for the growth of this university. Other great scholars of this monastery were Jetari, Santipa, Jnanasrimitra, Ratnavajra and Naropa. On the other hand, Nalanda flourished during Pala dynasty only. 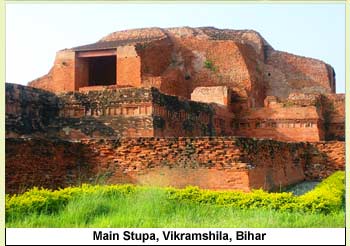 Around the year 1200, Muslim invaders defeated Sena dynasty and destroyed Vikramasila along with all major centers of Buddhism of that time in India. Gradually, the excavation process for the leftovers of these ancient learning centers started at village Antichak, Bhagalpur district, Bihar and the work is still going on.Initially, Vikramshila University was not associated with Buddha. However, in later period, the university developed as the supreme center of Buddhist education. This ancient education center was situated on the top of the hill which was on the bank of the River Ganga. Beautiful temple architectures have been found right at the middle of this monastery where a life-size depiction of sacred Mahabodhi tree was positioned. There are 53 small temples found when an excavation had been made. These temples were positioned nearby the main university building for spreading Guhyasamaja Buddhist Tantra. Also, it is found that additional 54 temples were established for other courses or teachings. The major temple had figurines of Nagarjuna and Atisa (great Buddhist teachers of that time) right at the entry.


How to Reach Archaeological Museum Vikramshila ?

You can visit Vikramshila after de-boarding at Patna airport which is 291 km away. It is near to Khalgaon railway station . Otherwise, Vikramshila is properly linked by transport communication with places like Patna, Gaya, Muzaffarpur, Motihari, Bodhgaya and Biharsharif.