Art and Culture of Bhagalpur

Bhagalpur is a well-liked district in Bihar and bears an antique and a rich cultural past. It has seen different stages of Indian history which have influences its culture to a great extent. The city is known for its diversity in paintings, monuments, art facts, folklores, folk dances and other rich art forms. It has been a home to various poets, writers, musicians and other artists who have made this region notable. 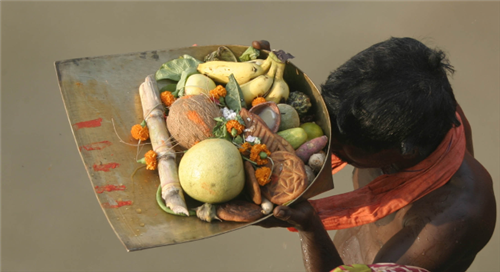 Vivid arts and cultural representations are still fresh in Bhagalpur Museum which was established for tourists and general public on 11th November of the year 1976. Tourists can see those artifacts and paintings of old times that reflect the influences of various religious ideologies.

Different types of folk dances and songs are popular in Bhagalpur. Local Bhojpuri dances are famous to watch during any special occasion. A great number of these folk dances can be seen with religious theme in nature. So, the dancers try to invoke gods and goddesses through their dances by performing folk songs and music altogether and in a rhythmic manner. Paika is one of the popular dance forms of the region. Jhijhian is another celebrated dance form which is known as a ritualistic dance style and is mostly performed to worship the god of rain when people expect rain water urgently for cultivation, vegetation and lives of their region. The song of the dance is full of prayers for the Hindu god of rain – Debraj Indra. The dance performers are accompanied by a lead singer to sing the song with musical instruments like harmonium, flute, and dholak. The interesting fact of this dance is that the participants are women only and not men. What makes these dances unique lies lies in their presentation and style.

When it is the time to celebrate the festival of colors (Holi in India) then these folk songs hold the spirit and mood of the citizens in supreme level for example, Chaiti Holi songs (in spring season, February month). When it is rainy season of the year for paddy re-plantation, then the village women perform folk songs like Kazri and Ropni. The rural people sing folk songs during Maa Durga Puja, the goddesses of all divine power. Also, rural individuals of Bihar sing Behula-Bishari folk songs during Bishari Puja. Pilgrims, on their way to Deoghar, during the month-long Shravani Mela, sing Kanwariya folk songs. A strong cultural backdrop can be seen in Bihar with Anga Pradesh wedding folk songs (social wedding). 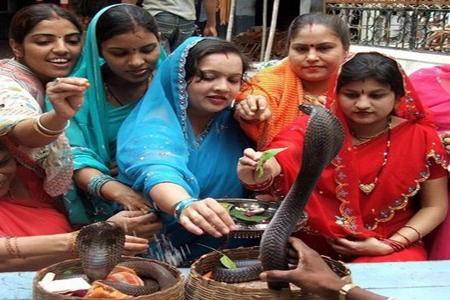 Major India festivals like Holi, Id, Dusshera, Dipawali are celebrated with pomp and show in this part of Bihar. Among all these festivals, Bishahri Puja is one which is celebrated throughout Bhagalpur. This festival begins on the 16th or 17th of August, every year (according to Hindu calendar it is on ‘Singh Nakshatra’ of “Bhadra” month). Around this time of the year, the local women sing Angika folk songs where they actually narrate the tale of goddess Bishahari. The purpose behind singing these songs is to satisfy the goddess so that people can be saved from snake bites in various fields and jungle works.

Various handicraft items made completely by utilizing locally obtainable materials like cups, beautifully painted saucers, bamboo made baskets, pauti woven (a special container made from sikki grass), cotton durries and gorgeous curtains can be found in Bhagalpur and all over the state. Especially, in Bhagalpur, tourists can watch plenty amount of tusser silk yarn as this city is extremely popular because of its sericulture.


Dresses and Jewelries in Bhagalpur

The traditional dresses of so called Bihari people comprise dhoti-kurta (men), saree (women). However, urban women in Bihar wear Kameez-Salwar in place of saree in normal lifestyle. A saree is worn by Bihari women in "Seedha Aanchal" style under Indian tradition. Further, rural as well as urban Bihari men also wear western shirts and trousers. The traditional Bihari ornaments as well as a host of modern jewelries include rings (men/ women), bangles (women), Chhara, Hansuli, Kamarbandh and others to name here. 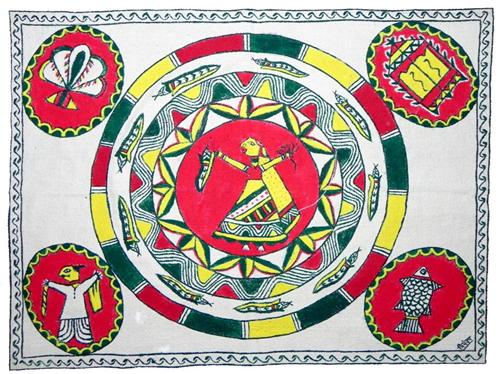 In Bhagalpur, there are modern art forms on abstract topics which are well-known as Manjusha art. Manjushas are temple-shaped boxes, which are made from eco-friendly materials like jute, straw, paper and bamboo. These paintings are dedicated for snake gods and prayers are offered towards Bishara. Again, some ancient art forms within this genre can be found on Lahsan Mali (representing a gardener caste), the decorator of Bihula ship (a legendary ship of that time). Like Manjushas paintings, there are Madhubanis art forms as well and they reflect greater cultural awareness of Bhagalpur region in terms of folklore and poetry. Other themes reflected and personified through these paintings are nature, sun, fish and moon. The RGB (red, green and blue) color theme on black background can be well-noticed in Manjusha art forms.

Both vegetarian and non-vegetarian foods are popular in Bhagalpur. Two famous Indian foodstuffs that you can taste here are Litti-Chokha and Dalpuri. Litti is a vegetarian food made of salted wheat flour. It is filled with sattu (fried gram flour) which is the main ingredient for this food. Inside litti sattu is prepared with some special spices and finally served with ghee and that is called Litti-Choka.Apart from these two Khichdi and Kadi bari are also very popular. Kheer is prepared to accomplish any special occasion.

Bhagalpur is a Hindi speaking region. The most popular regional language is Angika here. It has been found that Angika is one of the oldest languages in this planet and many people speak it worldwide. A number of other languages (vernacular – Bihari dialect) spoken in Bhagalpur district comprise Maithili, Pratyushini and Urdu. Hinduism is the major religion of the town yet these is significant population of Muslims and a small number of Christian minority people.