The city of Bhagalpur in eastern Bihar state of Indian subcontinent is mostly famous for products manufactured from silk here. After silk production, rice and sugar are two mostly produced end-products from this city of the state.Bhagalpur stands on the banks of the plane of Ganga basin, where the location lies at 25°15'N latitude and 87°0'E longitude. This city is situated at the height of 141 feet above the measurement of sea level. 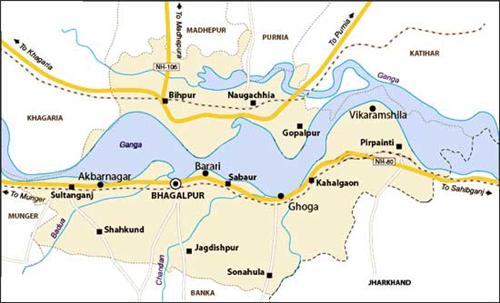 Bhagalpur is just 215 km away from the capital of Bihar, Patna. Further, it is only 411km from Kolkata, the capital of West Bengal. Other districts close by Bhagalpur are Munger, Khagaria, Madhepura, Banka and Purnia. In additional, the city is also the neighbor of Sahebganj and Godda districts of Jharkhand state, India.

Bhagalpur experiences subtropical torrential rain and moist climate. The summer season in Bhagalpur starts from March continues till June. May is considerd hottest month when temperature could rose upto 45°C. Though it is relatively cool during evening but moisture in the air makes the atmosphere humid and relatively uncomfortable. Monsoon arrives by July and continues till the month of September. The sky remains cloudy with pleasant rainfall during the period of June to September when temperature ranges between 30 and 33° C. However, the winter season demands woolen clothes, jackets and sweaters from travelers as it falls in between December and February month. The season is typically cool and has a lovely environment. Minimum temperature during winter remains 11° C, while the maximum is 33° C.

The scientific cum agricultural study of the region has revealed that Bhagalpur consist reddish alluvium soil in southern part of the district. This alluvium soil has been created by the floodwater of the Ganga River and other tributaries as well. Likewise, the central part of the district bears light red adhesive soil which is important to produce bricks and tiles (most of the brick construction companies are there in central part only). Moreover, this central land is favorable for human habitation too. The northern and the western part have river sandy soil which is resulted because of annual flood visits.

Natural flora can be found nearby river areas of Bhagalpur where ditches, pine, flowery plants, small trees and deciduous forest can be seen. The green zone of vegetation in Bhagalpur district has been selected from the eastern bank of the river areas to the southern Safiasarai region. The similar way, right from the northern bank of the river Ganga to the western Lallupokhar region the other side of the vegetation land covers. Sinuar, Sheo Babul, Kataiya, Behaya and Mirchaiya plants can be seen here in aforesaid regions of Bhagalpur district. The green spots or areas bear Guava, Mango, Sesam, Deit, Palm, Mahua, Plantain and Semal types of fruits/ vegetation. This so called green spot covers 75 hectares of land of the district including planted as well as natural vegetation.

The Bhagalpur district falls under the influence of three principal rivers – the Kosi River-its tributaries, the Ganga River-its tributaries and the Ghagra River-its tributaries. The main Kosi River touches Bhagalpur district near Kursela and from that point the river continues 260 km (160 mi) of journey to join Ganga. The river Ganga crosses Bhagalpur on the way to travel between the region of Allahabad and Malda. When Ganga leaves Bhagalpur, it flows southeast at Pakur and then travels as the Hooghly River (West Bengal). Right from the southeast point the river Ghagra enters Bihar state ultimately at Chhapra town it meets the Ganga River. While flowing through Bihar, it touches Bhagalpur. However, Ghagra is regarded as the largest tributary of the river Ganga only.