Bhagalpur with its rich historical heritage is one of the important part of Bihar. It has witnessed different stages of Indian history be it ancient, medival or modern. The researches and examinations of great historians and archeologists have found that the present word “Bhagalpur” has originated from the word “Bhagdatpuram”, a distorted form of the word, which means the city of good luck, as this place is regarded with this name in ancient age of the flourishing Anga Kingdom of the region.

The old Bhagalpur region is believed to have contemporaneous to Patliputra or present day Patna, the capital of Bihar. Mandara Parvat located in Bhagalpur finds mention in many Hindu religious texts. Kalidasa's work Kumarasambhava refers to foot prints of Lord Vishnu on the gradients of Mandara at present day Bhagalpur district. The present day’s Bhagalpur was a city which was profoundly accepted as one of the major trade centers of Eastern Indian region right from 7th century. 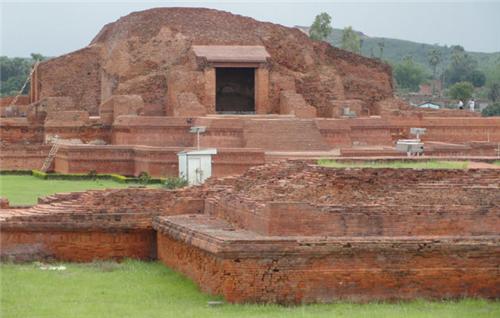 An evidence for this information has been found in the ancient writings of Chinese scholars and voyagers Hsüan-tsang and Fa-Hien. That ancient Bhagalpur city had a huge harbor on the Ganga riverside at a location known as Champanagar in earlier times and at present known as Champanala. Throughout an archaeological excavation program, several antique boat pieces and ancient coins have been found in current day’s Bhagalpur district and they belong to the Middle and the Far East. Prehistoric cave sculptures during the reign of monarch Ashoka from 274 to 232 BC are found in the zone and at Sultangunj, which is 20 km west of Bhagalpur district, a temple from the Gupta epoch still survives in Bhagalpur. The remains of antique Vikramshila University are situated 44 km east of Bhagalpur. The imperial university lines next to Nalanda, and owes its derivation to Dharmapala, the pious Pala king who declared himself Paramasaugata (principal worshipper of the Buddha) and was a huge patron of Mahayana Buddhism.

Bhagalpur during medieval period was division of the Mohammedan territory of Gaur, West Bengal, and was consequently subjugated by Akbar. The burial place of Suja, brother of Moghul ruler Aurangzeb, in the center of the municipality is evocative of the city's connection with the Mughal period or medieval India. Bhagalpur conceded to the East India Corporation by the endowment of the royal leader Shah Alam II in 1765.

Bhagalpur was one of the major trade centers in Bengal administration throughout British India phase. The public violence that ruined out in and in the region of Bhagalpur in October 1989 witnessed major loss of life and property. Almost 1200 lives were lost. At present the city at distance of 220 km east of Patna and 60 km east of Munger is a fast developing town with super markets, high-tech malls, roadways, railways and fashion-oriented people.